Revision has got to be the biggest pain in the a**.  Seriously, if I could just get it right the first time… but that’s not really the way writing works.  It takes stamina to push through a long draft, but sometimes it takes time to fully develop that right voice, the right tone.  My intent during the original writing of Water’s Edge really lacked authenticity, and frankly–bite.  So here’s an excerpt from the original, following by the revision.  I think the second feels much stronger than the first… but maybe I’m wrong.

Mr. Johnson’s Junior History class felt like torture.  This morning, I tried to tame my hair up and back in a bun, but I could feel it starting to tilt.  I tried to flick whatever was in my eye OUT, and I’m sure I looked stupid blinking.  Between that and my hair falling over my ear, I was definitely not looking my best.  Even as I realized that I was out of lead in my pencil, another spitball landed in my hair.  What was this, fifth grade all over again?

When the third spitwad hit my hair, I gripped the edges of my desk, taking deep breaths, trying real hard not to scream and cry at the same time.  I didn’t know if I was going to survive this school.

This was my ninth day, nearly completing my second week.  Every day had been an exercise in endurance.  Not a single person had spoken to me—well, teachers spoke to me, and employees of the school, but no one else.  Not that I had tried terribly hard to speak to them either, but the kids at this school really sucked.

I wish I could say that they hadn’t noticed me, but the glob of sticky paper now tangled in my curly bun said different.  My hands were gripping the desk so tightly, the knuckles ached.  I had what my mom used to refer to as ‘a moment,’ and I lost control a little.  It happened sometimes when I got emotional or upset.

I did not want to notice the bottle of water sitting on Mr. Johnson’s desk, or the gurgle from the large bubble that almost tipped the bottle when it burst.  That was me, I thought, I did that.  Need to calm down, calm down calm down, I kept telling myself.

I took a deep breath, forcing the air past my tight chest.  Exhale darkness; inhale light.  I do not know if that meditation stuff works, but desperate times call for desperate measures.  And if I wasn’t careful, I could ruin everything the Beckman’s had tried so hard to give me, the anonymity, the “Normal” life.  There were things I could do.  It wasn’t like I couldn’t protect myself.  But if I did them, if I chose in this moment right now to make the wrong decision and let that water bottle explode, sending that plastic lid across the room to lodge in the eye of the boy who was currently tormenting me, the incident could probably  be explained away.  Especially if there were no other revealing incidents.  But I didn’t know if I could stop there.

Another slobbery chunk landed sickeningly in my hair.

I twisted around in my chair.  The ‘tool’ who thought his little joke was SOOOO funny high-fived his friend.  He clutched an empty plastic pen tube to his chest, his lip curled up in a smirk.  If I could’ve been objective, I supposed he was cute, in a jock-tastic way.  He had sandy-blonde hair in that deliberate tousled look that all the ‘cool’ kids here seemed to have.  He even had a dimple.  But there was something cruel around his eyes, a regular plastic ‘Ken’ doll come to life.  His two friends were just Abercrombie clones with interchangeable hair.  They clearly thought he was hysterical.

I pulled the mush from my hair and flicked the mess back toward them.  I wanted to smack that smirk right off his face, but I settled for flipping them off.  What I really wanted to do would blow my cover clean out of the water.

“Miss Bailey.”  I winced, busted.  “I do not know what was acceptable at your previous institution, but here at Metro Midtown, that gesture is not okay.” 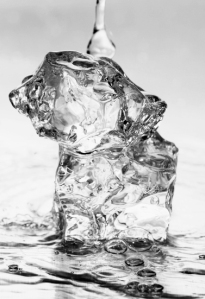 Now for the same passage AFTER some time, thought about intensity, and revision.

High School is supposed to be the best time of your life, right? At least that’s what people keep telling me, that I’m supposed to relax and enjoy it, meet boys, go to Prom, that kind of crap.  Maybe they’re right.  Maybe that’s the way things should be for most people… most normal people, people who have families and moms that aren’t dead, people that can’t self-destruct and destroy everything around them, people who aren’t hunted by secret societies filled with radical fanatics… for those people high school probably is the time of their lives.

But sitting in Mr. Johnson’s AP History class, waiting on the moron behind me to do something else stupid, has me thinking that if this is the time of my life, I should just quit right now.

It had started with poking—he kept poking me in the shoulder. “Hey New Girl.  Gotta pencil?”

I gave him paper.

He poked me again.

I twisted around in my chair, glaring.  “What?”

I turned to the front.  I tried to focus on the lecture, tried to ignore the occasional prod from the guy behind me, really tried to ignore the fact that I had zero interest in the U.S. Constitution in the big scheme of things… The big scheme of things being that this was my ninth day at this school, I had not seen my dad in a month, and the moron behind me apparently had friends, friends with nothing better to do than shoot spitwads at my hair.  That’s right¸ spitwads, because some things from fifth grade never get old.

I have curly hair.  It’s a pain.  If I want to bother with actually ‘fixing’ it, that means a lot of hair product and effort.  This morning, it hadn’t seemed worth it.  So I had just twisted it up on my head, put a couple of cute clips in it, and called it good.   But at some point in the day, the messy bun had started to loosen.

I wasn’t the only target for spitwads, either.  The girl in the next row and a couple of seats forward also had a couple suspicious white globs in her dark brunette hair, but she hadn’t noticed yet.

When the third spitwad hit my hair, I gripped the edges of my desk, my knuckles aching.  And then somewhere in the vicinity of my chest, I felt a little slip, like my heart had bumped into my ribs, and I tried very hard not to notice the bottle of water sitting on Mr. Johnson’s desk or the way the water seemed to be gurgling, a large bubble nearly tipping it.

I took a deep breath, forcing the air past my tight chest.  Exhale darkness; inhale light. Lately, in my own desperate attempt to find some control, I had been trying some breathing exercises.  I didn’t know if that meditation stuff worked.  All I knew is that I couldn’t keep exploding and making things happen around me.  I had to stay hidden, not draw attention to myself, be Normal.  There were things I could do, but if I did them, if I chose in this moment right now to make the wrong decision and let that water bottle explode, sending that plastic lid across the room to lodge in the eye of the guy whose slobber was currently in my hair, then I couldn’t stay here.  The Beckman’s, the family I was staying with, had been so nice and were trying so hard to make things work for me.  I thought of them, tried to keep calm.

But then I could hear the sound of one of the guys behind me clearing his throat, really nasal and nasty, building a chunk of snot.  I closed my eyes, praying a little.  But it wasn’t enough.

I felt a chunk land sickeningly in my hair.  I was pretty sure he hadn’t even bothered with paper this time.  I tried not to vomit.

2 thoughts on “Rewriting for Intensity”